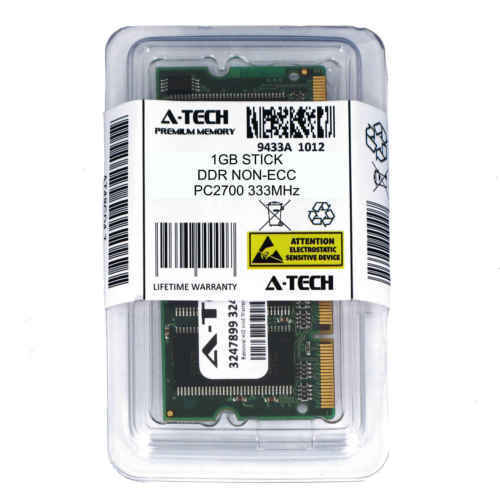 Those who work with computers frequently utilize additional RAM. The PC2700 DDR-333 1GB RAM module is sufficient for surfing the web on some computer systems. You can install this RAM yourself.

What is RAM and DDR?

Random access memory, or RAM for short, is a form of data storage that stores information being used by the computer. For example, all of the programs and processes that you have open right now are stored in the computers RAM. Additional RAM installed in a PC makes it possible for the machine to work faster or to operate more programs at one time.

DDR, which stands for double data rate, is a type of memory format that came out around the year 2000. DDR RAM transfers data twice per clock cycle whereas non-DDR RAM transfers data once per cycle. Regardless if the clock speed of the RAM remains the same, DDR memory almost doubles the rate at which data is transferred between the memory and the rest of the computer. DDR1, as it is known, is the first generation of DDR memory. It has been replaced by updated generations of memory, including DDR2, DDR3, and DDR4.

Are different types of DDR modules compatible with each other?

Because the computers motherboard can only support one type of memory at a time, DDR memory will only work with other DDR memory, not DDR2, DDR3, or DDR4. If you buy your memory modules separately, make sure that they are the same type.

PC2700 or DDR-333 is the model number of this specific type of DDR memory. The two notations refer to different characteristics of the memory. DDR-333 means that the memory operates at 333.33 million transfers per second. It does not refer to the actual amount of bytes transferred per second, but rather the number of operations occurring every second. Because the RAM can send multiple bytes of data to every operation, the real transfer rate is higher, at around 2,666.67 Mbps. The result is the peak rate. The actual transfer rate may vary at any one time based on several different factors.

What do DIMM and SODIMM mean?

DIMM and SODIMM are terms that refer to the physical modules that house the RAM on a small circuit board. They attach to the computers motherboard through a series of pins. DIMM, which stands for dual in-line memory module, is mainly designed to fit into desktop computers. SODIMM, which stands for small outline dual in-line memory module, is more suited for laptops and notebooks. DDR DIMM RAM contains only 184 pins whereas DDR SODIMM RAM has exactly 200 pins. Despite the disparity in the number of pins, SODIMM is physically smaller than DIMM, allowing it to fit into smaller spaces. To ensure that the RAM is compatible with your computer, always check beforehand that it will fit into your motherboard.

What is the difference between ECC and non-ECC memory?