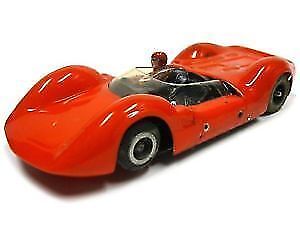 Slot cars have long captured the imaginations of children and hobbyists around the world. These 1:87 to 1:64 scale models of famous automobile models can still be raced and are a prized collectible item among slot car enthusiasts. Accessories, parts, and original slot cars and tracks offer a chance to customize existing collections or introduce others to the joys of slot car racing.

There were two major companies that manufactured these scale toys. A British company by the name of Minimodels rolled out their first offering, the Scalextric, in 1957. In the United States, the leading manufacturer was the Aurora company, which introduced the Model Motoring slot car in the early 1960s. The Aurora company produced over a million cars by 1963 as the slot car craze swept through the United States and many small towns and cities opened slot car centers where enthusiasts could race their cars.

What was the top slot car sold during the 1960s?

What parts are available for the Aurora Thunderjet-500?

Given the sheer number of this model sold during the 1960s, its no surprise that collectors repair and replace worn out pieces on the Aurora T-Jet 500 with regularity. Some common ones include:

Which features are part of an HO slot car track?

For serious HO enthusiasts seeking a custom track experience for their cars, there are several features to consider when creating or building your own track, such as:

What do you use to clean the HO track?

Cleaning is an important maintenance task. To clean it, you will need 180 grit or finer sandpaper, a Tomy track cleaning tool, and a clean cloth.