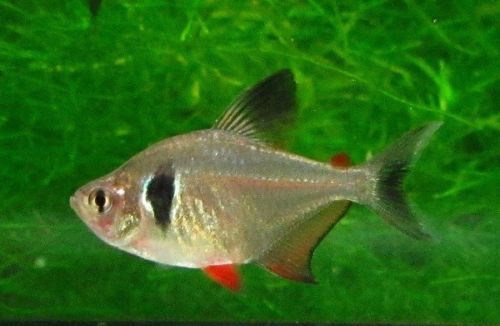 Tetras belong to the Characidae family and are distinguished by their adipose fins, which are small rounded fins located between the dorsal fin and the tail. These freshwater fish are native to South America and Africa and are found in rivers and streams. Most of these tropical fish are imported either from Asian countries where they are farm-raised, like the Neon Tetra and the Black Tetra, or from South American countries where they are caught from the wild, like the Cardinal Tetra.

What types of these aquarium fish are available for aquariums?

While there are over 700 types of Tetras, only some are commonly kept in aquariums. Black Tetras, also known as either Black Widow Tetras or Black Skirt Tetras, Cardinal Tetras, and Neon Tetras are the more popular types of freshwater aquarium fish.

Some of the commonly kept Tetra species for freshwater tanks:

What other fish can be placed with Tetras in aquariums?

Tetras are good community aquarium fish and will co-exist with most fish species readily. When buying them for your aquarium, be sure to purchase at least six or more as they like to swim in groups. Guppies are good tankmates, and the guppies look good alongside the Tetras. Mollies, cory catfish, and small gouramis are also good community tankmates. Avoid tiger barbs because they tend to nip fins.

What is a recommended fish food for these fish?

To keep the fish healthy and active, it is good to offer them a varied diet consisting of freeze-dried, live, and frozen foods.

These foods are appropriate choices for your freshwater aquarium fish:

These fish are egg layers and need to be placed in a separate tank for breeding, preferably of a smaller gallon size, where the eggs wont be disturbed. If the fish are exhibiting courting behavior such as chasing each other, then its time to place them in a smaller tank to breed. A layer of marbles or a porous net should be placed as a bottom layer in the breeding tank for the eggs to fall beneath after they are laid. After the eggs are laid, use a low-flow sponge filter in the tank for at least a week in order to keep the water movement at a minimum.