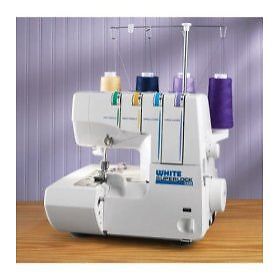 How does a serger sewing machine work?

When the fabric goes beneath the presser foot, the machine’s top needles stitch it and the lower components wrap thread loops around it. Sergers don’t use bobbins. The lower loopers and the top needles work together to make a tight, bound stitch. Each lower looper and its corresponding needle use separate spools of thread.

Sergers have sharp blades that sit in front of and below the feed dogs. They trim off excess fabric before it’s sewn. The trimming action eliminates bulky seams and the loops prevent fraying.

It is possible to use spool thread used for a sewing machine in a serger for small projects where you wont be running the sewing serger at top speed. Thread unwinds much faster from a cone and breaks far less frequently.

Most users choose their overlock machines based on ease of threading and how many cones they use. A sewing serger that uses four thread cones and is color-coded for re-threading is the common choice for home sewing.

What is the difference between a sewing machine and serger?

Sewing sergers use between three and eight cones of thread at the same time and quickly cut, sew, and bind edges in one operation. In spite of their complexity, overlock machines sew much faster than sewing machines. They are capable of 1,700 stitches per minute, while most home sewing machines sew from 700 to 900.

While fast, sewing sergers don’t offer the variety of zigzag or patterned stitches that sewing machines do, and they cant be programmed. Although the finished seams look zigzagged, each stitch the machine makes is straight.

What is a differential feed?

A typical sewing machine has a metal part called a feed dog that sits under the pressure foot. It grips the fabric and pulls it through the machine. A machine that has differential feed has two sets of feed dogs. They are the same size as normal feed dogs, but instead of being a single piece, are split into two parts.